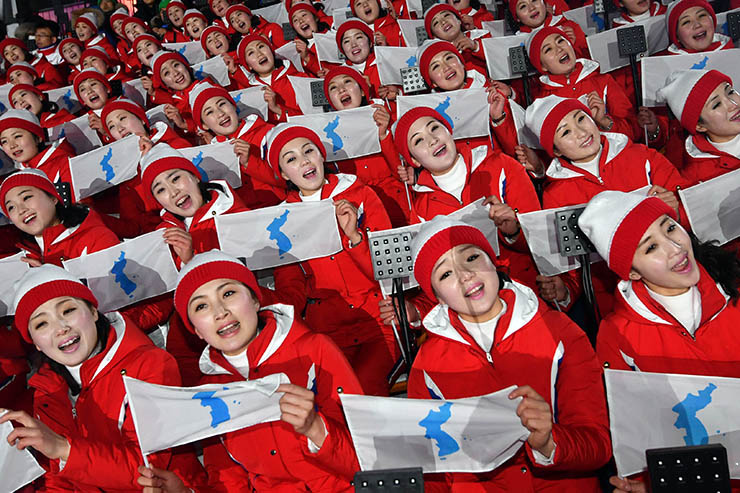 Japan complained about it; the International Olympic Committee (IOC) said not to use it. But North Korea did not care.

North Korean cheerleaders waved unification flags showing the eastern islets of South Korea as they cheered for the unified Korean women’s ice hockey team during its Monday match against Sweden.

This comes after South Korea’s foreign ministry decided not to use a unification flag showing Dokdo, its easternmost islets that Japan falsely claims as its own territory, during the Winter Games, in accordance with the IOC’s recommendation not to politicize sports events.

But on Saturday, North Korea’s state mouthpiece Uriminzokkiri refused to follow suit, saying “legally and historically it is clear that Dokdo is our people’s territory.”

It also criticized South Korea for “following the IOC’s wrong decision” and said: “It should be shamed for failing to defend the flag.”

Some South Koreans appear to feel a sort of catharsis from North Korea’s defiance.

“North Korea is doing a good job,” one person said on Twitter. “It is just an IOC recommendation. South Korea can’t act in such a way because we are very cautious about offending other countries. But North Korea doesn’t care.”

Another person said: “I think South Koreans should be grateful that North Korea keeps the Dokdo-showing flag.”

Such comments give a glimpse of the complicated love-hate relationship between South Korea and North Korea and their people. Polls show most South Koreans share negative views of the North. But apparently, they are not against everything North Korea does.