A popular Korean singer financed a full-page advertisement on Dokdo two tiny islets in the East Sea in The New York Times to reaffirm the islets are a part of Korean territory.

The vocalist Kim Jang-hoon, 41, teamed up with a freelance Korean public relations expert Seo Kyoung-duk to publish the ad in the major American newspaper.

The advertisement, published on July 9 with the headline of “Do You Know?,” stated “For the last 2,000 years, the body of water between Korean and Japan has been called the `East Sea.’ Dokdo (two islands) located in the East Sea is a part of Korean territory. The Japanese government must acknowledge this fact.”

Dokdo ad in NYT
It also asked for cooperation between the two governments to pass down accurate facts of history to the next generation and realize peace and prosperity in Northeast Asia. 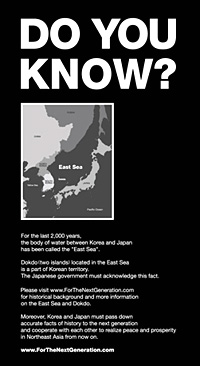 The publication came amid escalating tension between the two countries fueled by the Japanese government’s recent attempt to add Dokdo to a part of Japanese territory in a new reference book for middle school students.

In addition, the name “East Sea” has also been one of the most controversial issues between the two states. The Korean government has named the body of water the “East Sea,” while the Japanese government has called it the “Sea of Japan.”

“The advertisement is an act of civilian diplomacy,” Yonhap News quoted Kim as saying. “Civilians’ unified move against U.S. beef imports made Seoul and Washington sit at a renegotiation table. I think our collective move, embodied in the ad campaign, will be a steppingstone to globally inform people that Dokdo belongs to Korea.”

Seo plans to publish similar ads in other influential newspapers next year to commemorate Korean Independence Day, which falls on Aug. 15.

“With support from Mr. Kim, Internet users and overseas Koreans, I will constantly do the ad campaign,” Seo said.