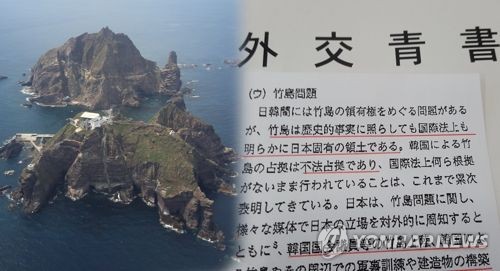 SEOUL/TOKYO, May 15 (Yonhap) — South Korea urged Japan on Tuesday to retract its repeated territorial claim over Dokdo, a pair of rocky outcroppings in the East Sea, saying it will only impede efforts to move forward bilateral ties.

In a statement, South Korea’s foreign ministry denounced the description of sovereignty over Dokdo in Japan’s yearly foreign policy document, known as the Diplomatic Bluebook, reported to the Cabinet earlier in the day.

The ministry lodged a strong complaint against the Japanese government’s repeated, “unjustifiable” claim over the ownership of Dokdo, which is effectively controlled by Seoul.

“The Japanese government will have to recognize that reiterating the unjustifiable and preposterous assertion about Dokdo won’t be of help at all to the establishment of forward-looking South Korea-Japan relations,’ the Ministry of Foreign Affairs said.

It stressed that Japan’s move will have no effect on South Korea’s firm territorial sovereignty as clarified by history, geography and international law.

“The government will deal resolutely with any of Japan’s provocations related to Dokdo,” it said.

The ministry will soon summon a senior Japanese embassy official in Seoul to lodge a formal protest, a government source said.

In the diplomatic paper, Japan also refused to accept “East Sea” as the name to describe the body of water lying between the two nations.

It also wiped out the expression that South Korea is “the most important neighbor” to share strategic interests with Japan.