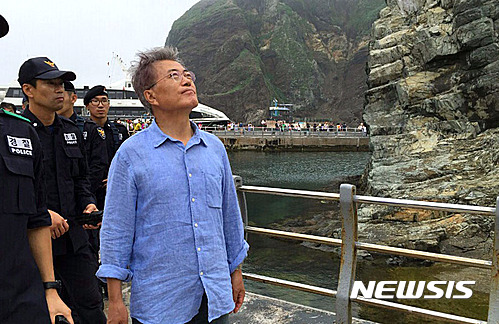 Nikai will be returning a visit by Moon’s special envoy to Japan, Rep. Moon Hee-sang, who had also delivered Moon’s personal letter to the Japanese leader.

Whether Nikai was carrying any message from Abe was not known, but Moon and Abe have agreed to hold a summit in the near future.

The two are set to encounter each other at the upcoming Group of 20 summit to be held in Germany’s Hamburg on July 7-8, but they are widely expected to hold a separate, bilateral summit.

Their meeting, when held, may mark the resumption of what is often referred to as “shuttle diplomacy” between the two Asian neighbors that have stalled over the past four years due to a spate of thorny issues that include Japan’s territorial claim to South Korea’s islets of Dokdo, as well as what is viewed here as a Japanese attempt to whitewash its wartime crimes.

The two countries signed an agreement in 2015 to settle the long-standing dispute over Japan’s sexual enslavement of tens of thousands of Korean women during World War II.

As part of the deal, Japan agreed to provide 10 billion yen

(US$9 million), not in compensation but in support funds, for the Korean women forced into sexual slavery.

President Moon has been critical of the agreement, which was signed by the former conservative administration under ousted leader Park Geun-hye.
Moon has said most South Koreans cannot accept the deal, apparently citing a need to renegotiate or even scrap the agreement with Japan.

dispute over the controversial agreement, both Moon and Abe have stressed a need for their countries to work together to rid North Korea of its nuclear weapons.